Each plate has four random-pattern squares with a circle of pattern elements lying in depth relative to its surround. The depth effect is due to the circle and its surround being printed on opposite sides of the plate.

The Frisby Stereo Test has 3 plates allowing for testing stereo acuity disparity as fine as 15 seconds of arc.

frisby stereotests,  with no need for special glasses, and suitable for screening young children

This test has its 30th anniversary in 2008.  It is well-established, being in use in orthoptic, optometric and ophthalmic clinics world-wide.

It has three transparent plates. One of these is shown on each presentation to the subject. The box is for storing the plates.  The box also has a fold-out flap for providing a clear background against which the plates are presented.

The ‘target’ that the patient has to detect  is printed on one side of each plate.  This tar 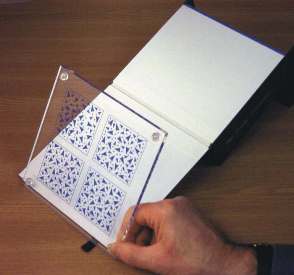 Such an observer is essentially seeing the thickness of the plate by virtue of the texture elements printed on the two sides.

An observer lacking normal binocular stereovision (or a normal observer viewing with one eye only) fails to be able to detect the target as it can be distinguished only on the basis of binocular disparity cues to depth.

The test box has a fold-down flap that provides a white background against which the plates can be viewed.

This photo shows a plate as it is seen by the subject.  Obviously in this monocular view the target-in-depth is hidden. 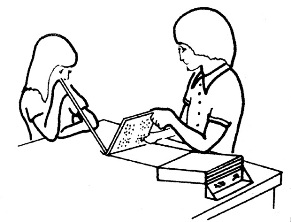 The three plates are of of differing thickness, 6mm, 3mm and 1.5mm.  Thus they present different sizes of disparity cues, thereby enabling the stereoacuity of the observer to be measured.  The plates can be presented at differing distances to further vary the disparity cues.

A table in the box lid and in the Instructions Booklet  shows disparities for each plate in the  40-80cm viewing distance range.  A measuring tape is provided to assist is controlling eye-to-plate distance.

The plates are durable but to assist in preventing scratches when laid of desk tops etc each one has four studs, one at each corner, so that when a plate is laid down its surface does not touch the surface on which it lies.  The stud alongside the target quadrant  has a flat surface on the target side of the plate, thereby enabling the tester to discretely feel the studs and find out where the target is while carefully noting where the observer is looking.  Thus an appropriate ‘preferential looking’ response can be used as a positive response, and this is a distinct advantage with young children.

See also the page on The Frisby Screening Stereotest. This is provides a single 6mm plate without studs in a easily portable special presentation box. This box facilitates easy presentations to children from about 6 months of age. For such young children ‘preferential looking responses’ at the target are particularly useful for establishing a positive result, that is, – stereo vision present.